Chanel, like all fashion houses, has a look [Gucci is leather and interlocking horsebit, YSL is 1960s cafe polemics and Burberry will always – in part – be in the trenches, to traverse three countries in one sentence].

In the nineteen nineties, when fashion became of interest to the emerging middle classes, and following a boom and bust period for several major brands, branding and identity came to the fore, with the corollary that popular past looks and lines could be mined to please a loyal customer base, whilst also reinforcing the marquee.

The styles we take for granted now, whether it be Armani‘s double breasted suits and generous pants or Gaultier‘s corsets and cones, can be traced to this era, following a nascent demand for label-centric clothing mastered by Nike and Levi‘s.

These days, customers, we are told, are too savvy to simply buy-in . In truth we just have more choice, which makes us no less susceptable to bad or new ones, but more open to alternatives.

Of course, fashion brands have always been about reinvention. Without it, since those icon-making days, the whole treadmill would have stopped turning [and nearly has thanks to the internet and fake goods].

The difference now is the way [the best] fashion houses invert the archetype: the relaxing of formalism, the full-circle re-appraiasal of logo as retro-shift, hybridization [of formality, gender, purpose, materials and fit] and in its highest realization, a melding of branding as [non logo] design component [Balmain], colours and patterns [Burberry] and hardware [Gucci].

Streetwear has played a part in all this: wannabe fashion students scraping together what they can to buy branded goods, and stitching together the rest. It’s a process that has informed the best of the current stock [Jeremy Scott or Chitose Abe] as the boundaries of ettiquette and appropriacy diverge and are replaced with post-postmodern allusions with intricate high impact silhouettes

None of the above really applies to Chanel. It retains a focus on quality and on beauty as its core values. Chanel‘s ‘angle’ has always been anchored in its marquee [Coco’s black always lingers, as does the smell – regardless of whether you’ve actually smelled it – of Number 5, while Chanel designer/legend Karl Lagerfeld only had one black and white look.

The brand’s client base has also stayed rooted in the same economic demographic just as its geographical one has spread East and South of Europe. There’s no diffusion line, while there is modernity there’s a continued embrace of Jackie Kennedy-esque era jackets and dresses, and while there’s athleisure [of a sort] it’s either conservatively coloured or tastfully logo’d [by way of part concession.] Yes, Lagerfeld brought sexuality and cheek, the line increased in vampiness through his reign, but for an empire that has been built on Coco’s legacy of cutting the corset and apron strings, Chanel has resisted the flamboyant and far seeking adventures that its own risks initally allowed. 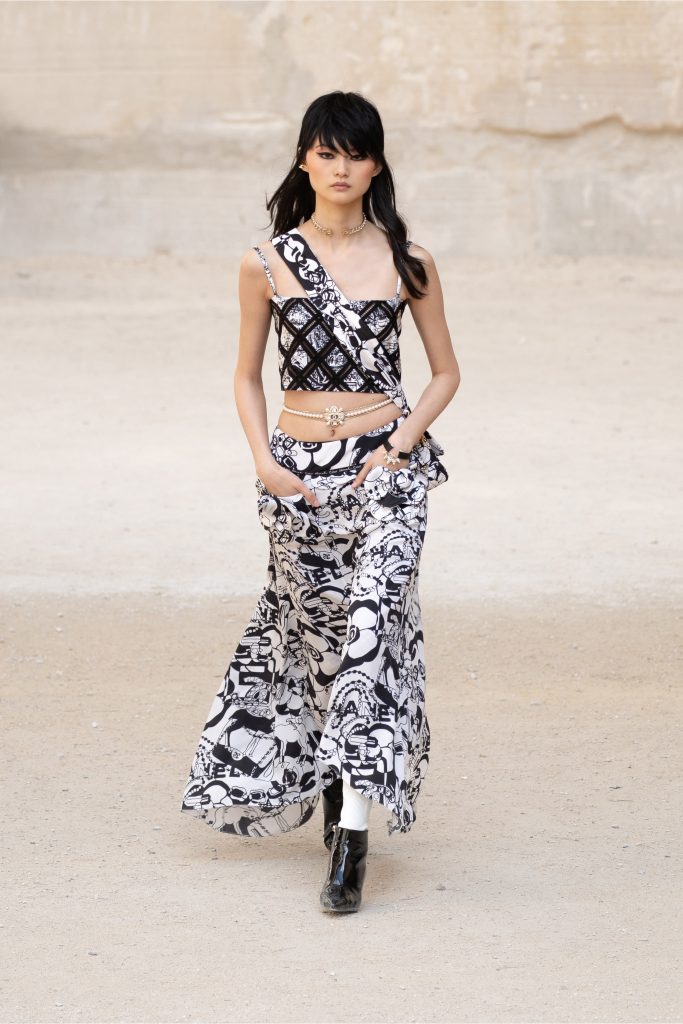 References for Virginie Viard’s take on the Chanel spirit for its Resort collection were osteninsibly in keeping with its tendency towards glass house/art house fair, with Jean Cocteau a nod to the epoch that made [and still makes] French culture and Chanel great, but that also affirms that this is where great ideas still come from. In adding a later 20th Century flavour, Viard puts her own imprint on the collection, primarily through the multiplexity of black and white that acknowledges the chess board ettiquette of wearing Chanel, while moving it into more complicated and fulsome areas that aspire to punk and modish freedom.

With Chanel you’ll always be referencing the past and adhering to a well-established code, but that past and that code can be interpreted, so it seems.