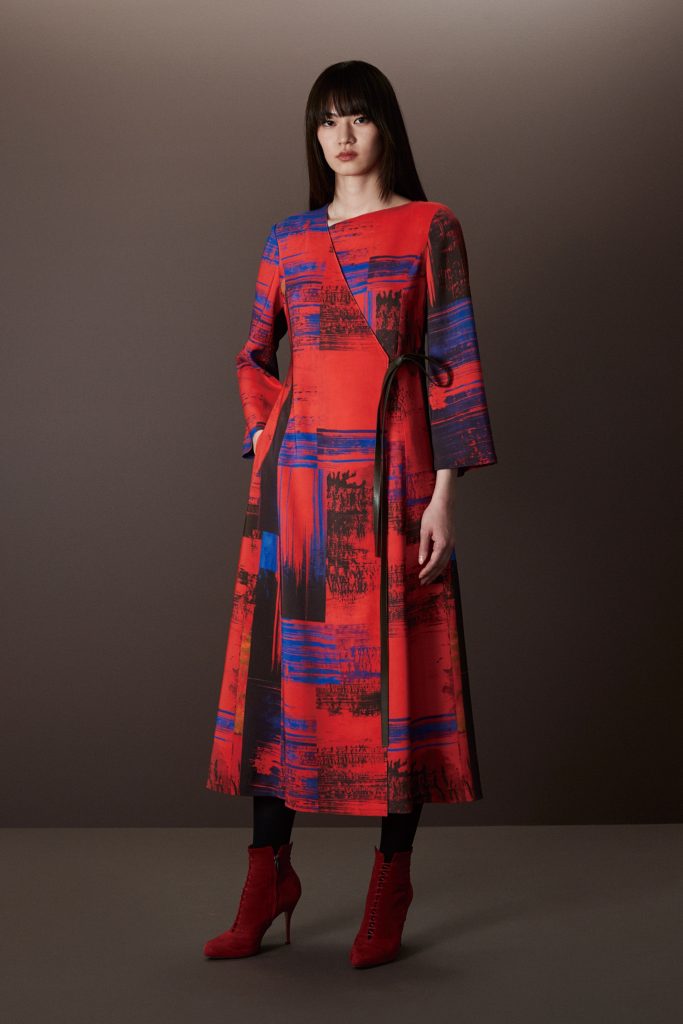 Tae Ashida doesn’t meet the prototypical profile of a hip Japanese fashion designer; at least not one who’ll be successful in Europe, where Japan and Tokyo – partly erroneously – are synonymous with a vibrant but somewhat disparate street scene, and designers/labels who have graduated this scene to either calcify its tendencies (Undercover) or inflate them (Comme des Garcons).

Neither does she fit in easily with the likes of Chitose Abe at Sacai – Japan’s most important contemporary designer – who has succeeded in seguing Japanese ‘tendencies’ (costumization through layered ‘non-disclosure’ being her primary trait) to create complex garments that lead the way in gender fluidity and work/street realignment; or the likes of Hiroko or Junko Koshino – traditionalists for sure, who haven’t flown the nest, but create exsquisite clothes more solidly rooted in Japan’s conservative past, for conservative customers.

Ashida – both ancenstrally (her father, Jun Ashida, was a designer for the Japanese Royal Family) and also in outlook, is a traditionalist in the only way it matters in fashion design: she embodies formal silhouettes specific to Japanese fashion (as have the Koshinos); to adhere to a seriousness of taste (as does Abe-san) in creating very stringent models of western style (Abe riffs more freely).

Rock n’ Roll and modern art are the things that influence Ashida, but what she’s saying about them hasn’t always been that clear. There are clear lifestyle elements to her designs (unlike Sacai) that in the Spring/Summer 2020 collection was ocassionally permeated with surprising colours in artistic shades. These mimicked the art she acknowledged in the collection, and revealed a relaxed approach that was intentional and intelligent: a second layer of thought and interpretation that – although not explicit – meant her designs sometimes transcended the lifestyle form.

A favourable comparison is with Yasuko Furuta, the designer of Toga, whose work on the European runway is more youthful and layered, but has a weightedness matched by Ashida’s Fall line. Furuta began making women’s clothes for women long before the male gaze was an issue. Previously, Ashida’s collections were creative, artistic, even daring (she asked genuinely interesting questions about materials and colours) but retracted for those consumers who wouldn’t tolerate risk.

Fall 2020 is the first time she’s pitched forward. Not only asking questions, but giving, over the whole collection,  specific answers (to the issue of heritage as it relates to modernity; on reasons for weightedness that Milan might agree with) to the questions she posed. More importantly, like Sacai, she has given thought to those who will never buy her clothes, that they might want to look like the people wearing them.