Fashion is not strictly a philosophy, although at times it has become a mirror of philosophical values (think Mormon costume) or has taken on a philosophical role as it (perhaps unwittingly) rides the times it dresses (Vivienne Westwood’s creations).

Neither do fashion’s practitioners speak philosophically. As much as the press and public have lauded designers as spokespeople of the 21st century (a role that has only recently been displaced by vloggers and influencers), designers themselves are often reticent – they let the clothes do the talking – speaking through their creations, committed to making and selling.

It’s journalists that weave the elaborate threads of a designer’s specific evolution and give weight to the artistic sensibilties.

But the philosophy of a designer, as hard as that might be to grasp through interviews, Look-books and the opinion of Vogue writers, is a valid concern because it takes fashion into the realms of design, into an understanding of what clothes design says about people and their outlook . And designers, although they don’t often say this, are very interested in these things.

The Sacai Ready to Wear Collection has focused on the need to craft-ily alter classical forms either through dividing the lower and upper half of garments into seperate creations or by mixing utility, pattern and design. From the start, it has always been this intention to re-create (rather than to shock or expound) that is strongest. There is an element of handing the ‘idea of the idea’ to the consumer (‘you could do this too’) as well as providing a base from which the wearer can mix and match, layer or cover from the base concept laid about by Japanese designer Chisote Abe.

At this point, as a straight man, this principle is revelatory. Chitose Abe isn’t saying you have to break the mould or your purse strings to adhere to creative principles. Rather she’s taken established forms (jackets, tops, shirts) and utilized them sensibly but stylishly. This ‘hybridization’ is a characteristic Abe has become strongly associated with.

By SS 2012 Sacai has upped the ante on the same theme by adding a third layer. Or one should say revealing the underlayer. This creates a sexual edge that is suffused by male tropes, subtle colouring complex patterns. The intense purple design below left is a motif Sacai would now incorporate going forward, particularly in militarized/psychedlic guise.

By 2013 and 2014 there is a continuation of the themes of layering (the asymetrical dress and jacket below left) of creations having ‘two faces’ by being different from top to bottom and/or front to back.

What becomes increasingly evident at the London shows is the increase in utility (a mixture of masculine/feminine elements (bolder shoulders in the work-like jacket below left and work-like pinnifore below right ) that also reflects a friendlier price tag and (by 2014) a bolder, sharper colour scheme. 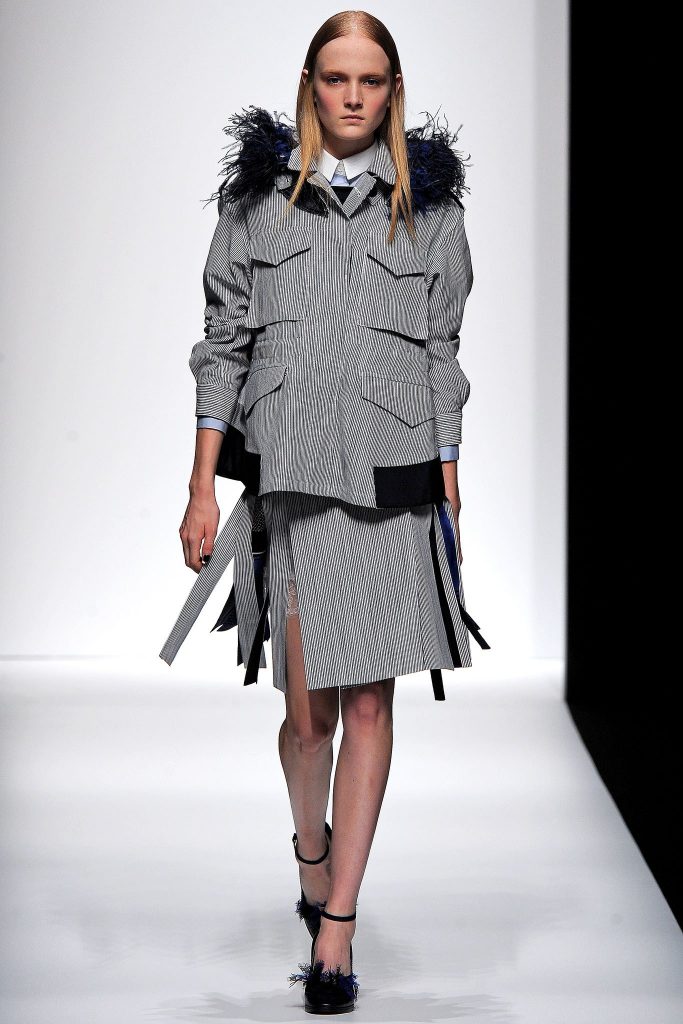 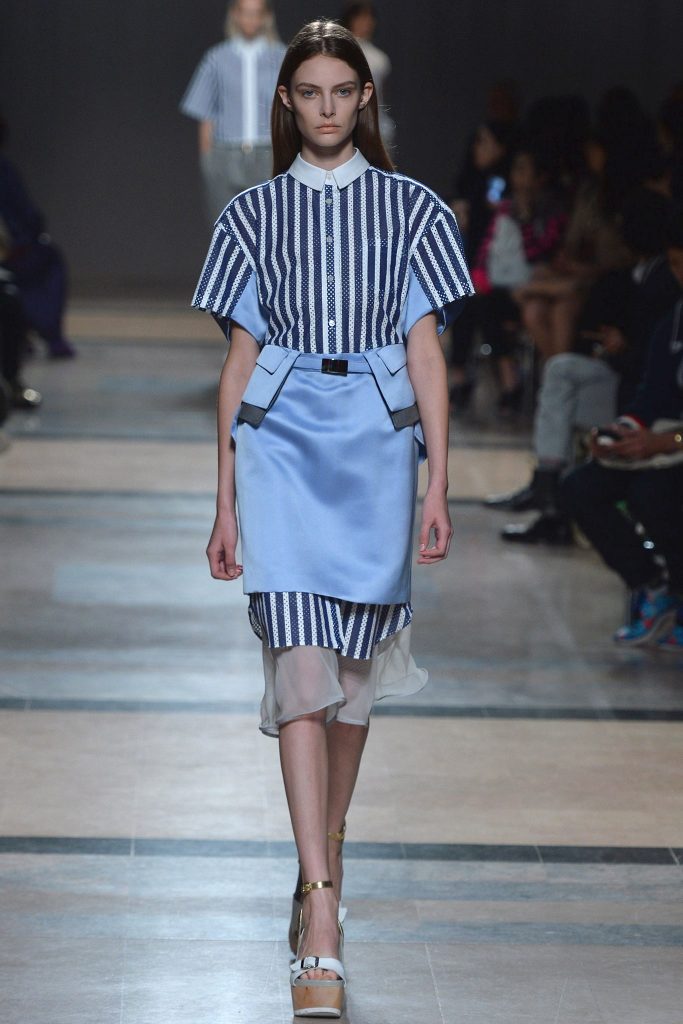 In 2015 – following a few seasons where her runway collections enabled her to truly make statements on signature style and motifs – lift-off:

A fusion of those layered concepts and femine/masculine consolidation into a bold collection centred on elaborate florals or cut to miltary spec. 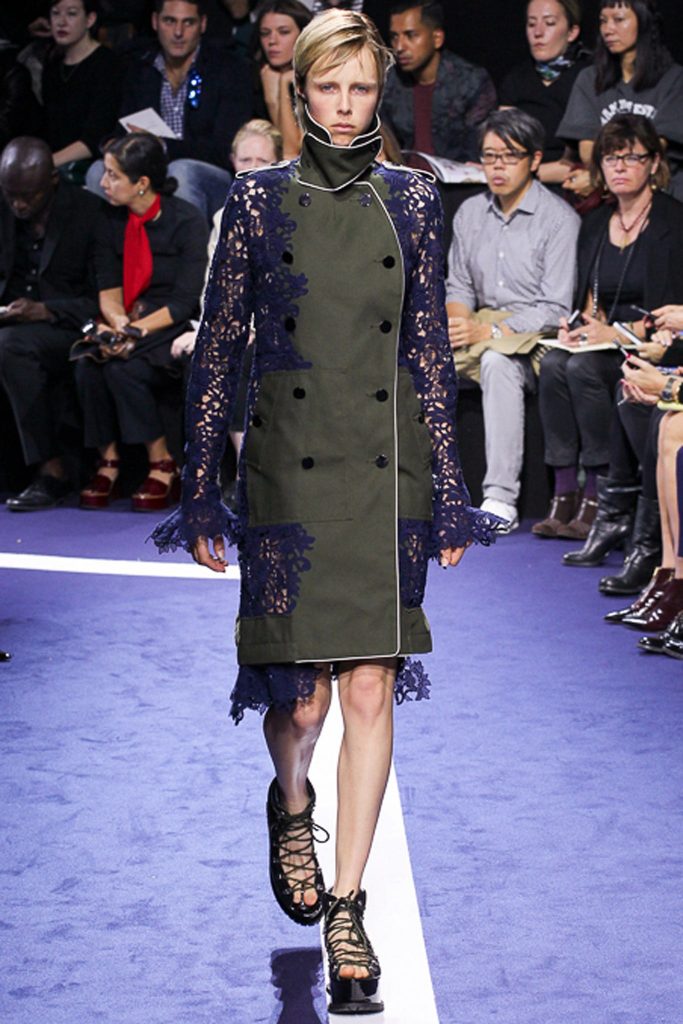 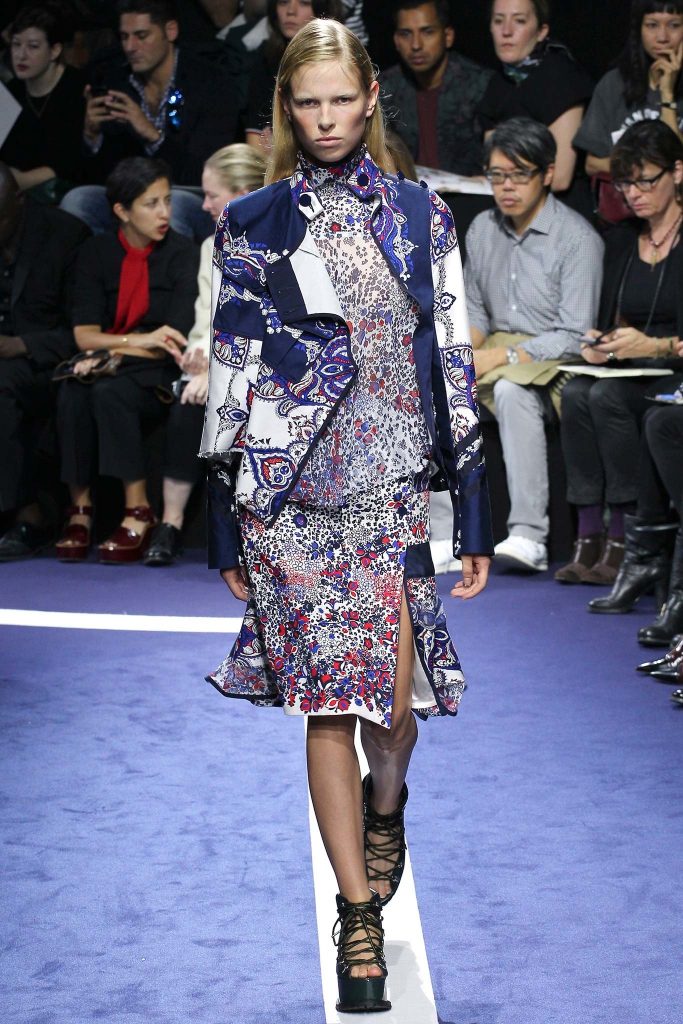 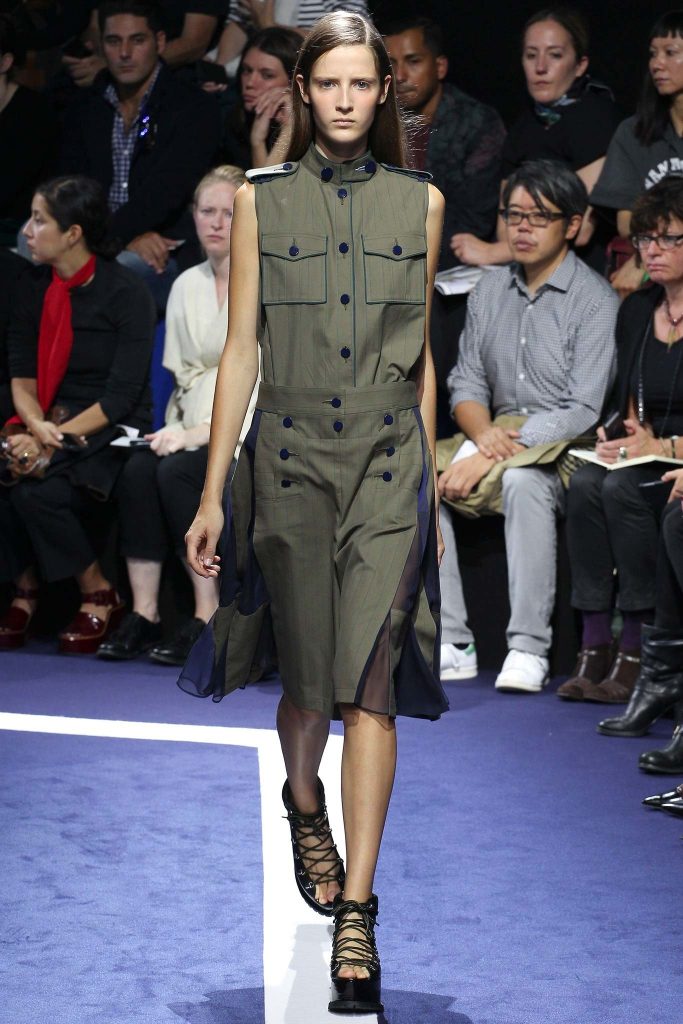 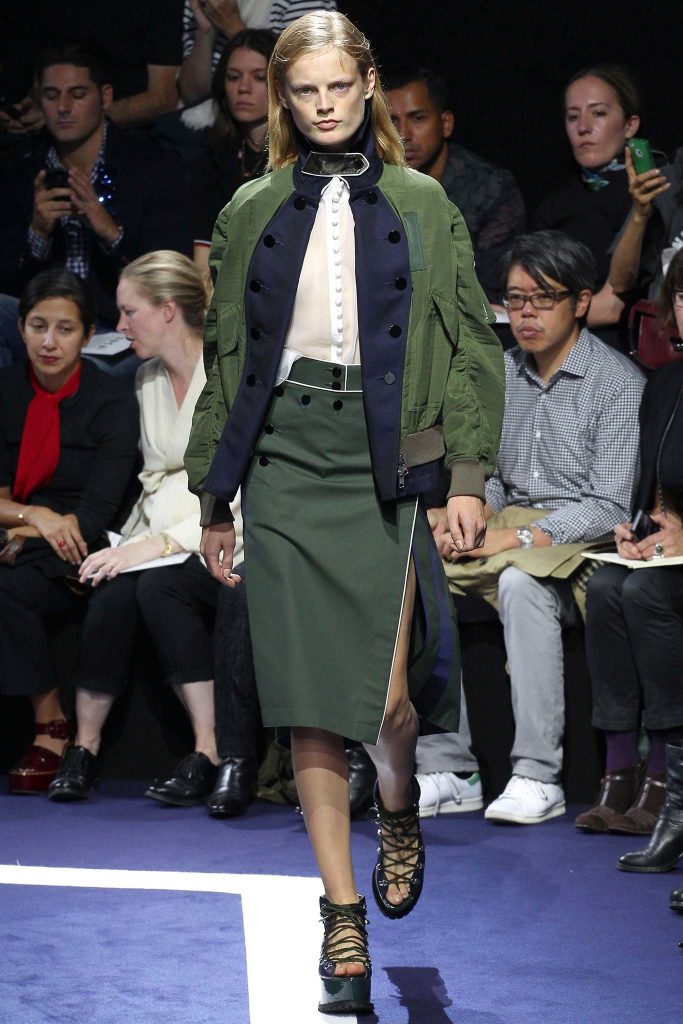 2016 (below) is where – following that crystalization of said concepts – Sacai moves on to greater complexity and invention. One could argue this is Sacai’s most Japanese collection (Kimono-esque long dresses with Tiger/building images in various light colours) before seguing into higher contrast lengths. As with the previous year, boldness and complexity have increased

2017 is the most blatant exemplification of the codes and motifs of previous collections into a psychedelic appropriation of rock music costumes . You can see the reference to Abe’s early vision by returning to 2013. In Hendrix and prime Prince there was a strong militaristic reference that was evident in Sacai back in 2015. 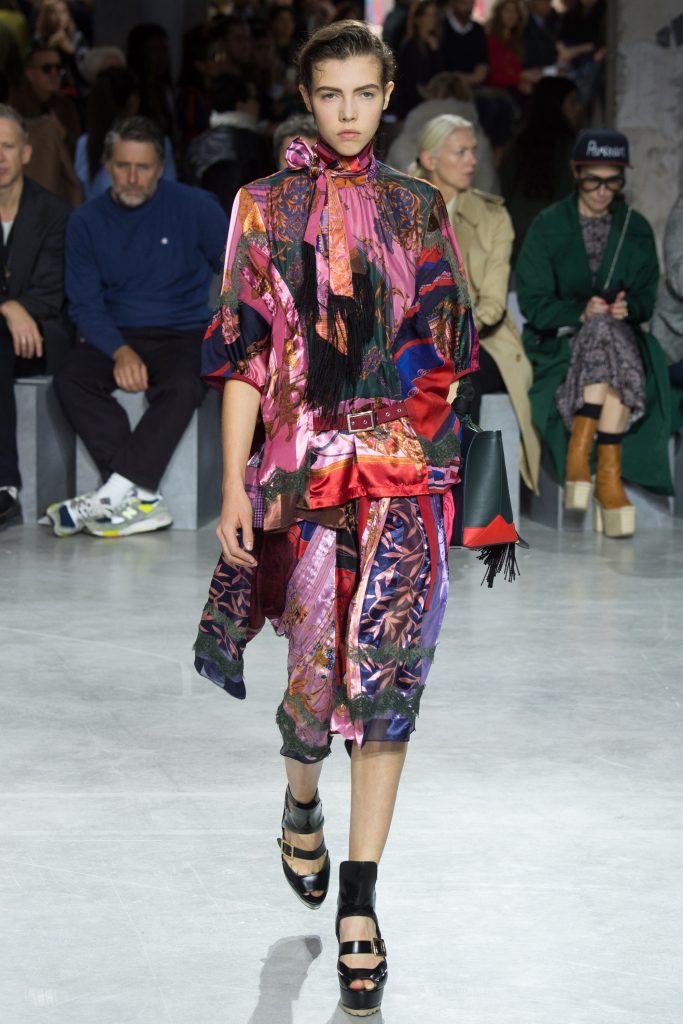 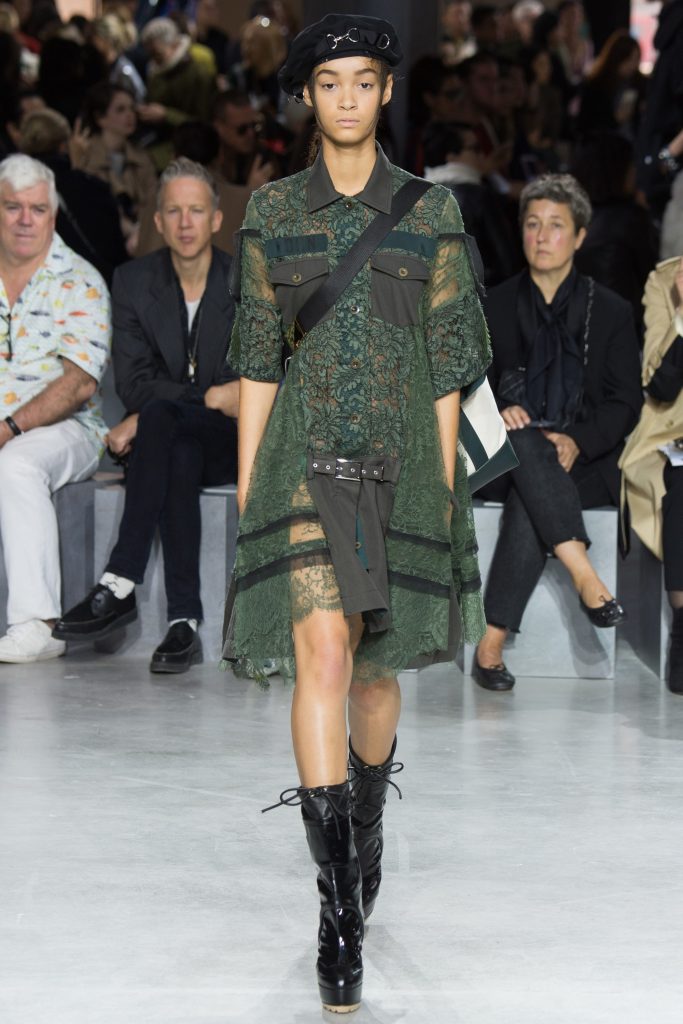 2018 is a return to both themes (pop culture colour and militarization) but with a shift from complexity to bolder, shape-led concepts and increased volume layering. In essence, this is a look that is relatively simple to emulate if you purchase an Afghan military scarf online! This may be sacriligeous but it’s also part of Abe’s philosophy of hybridization and of using whatever you can (at whatever price-point) to feed into key concepts. Assymetrical patterns and angles held together by those ubiquitous belt straps are other Sacai traits revisted for 2019. 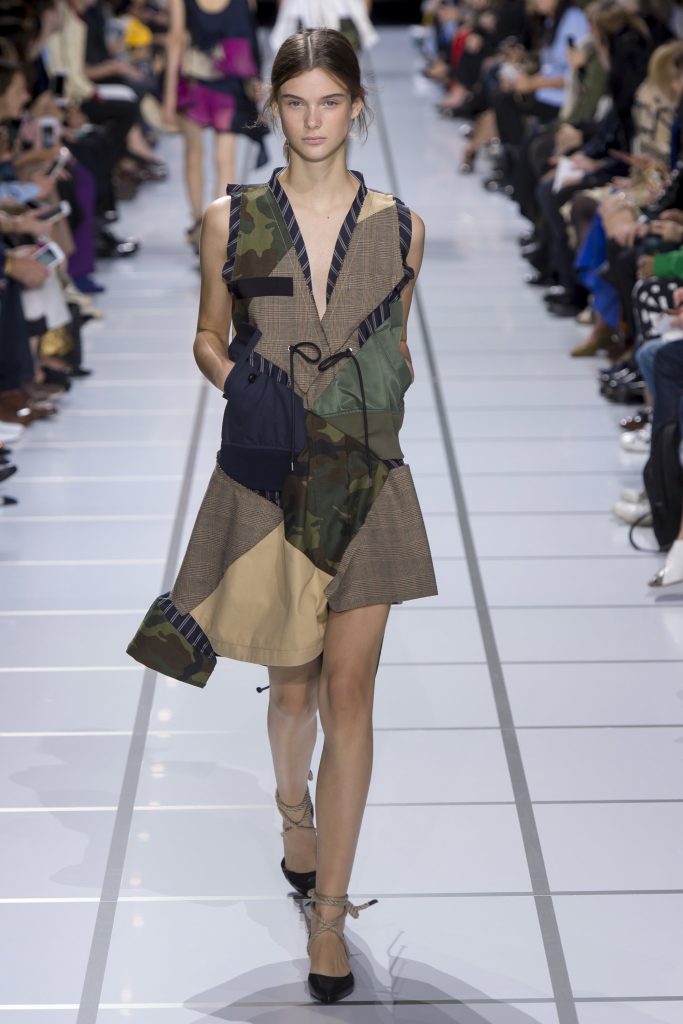 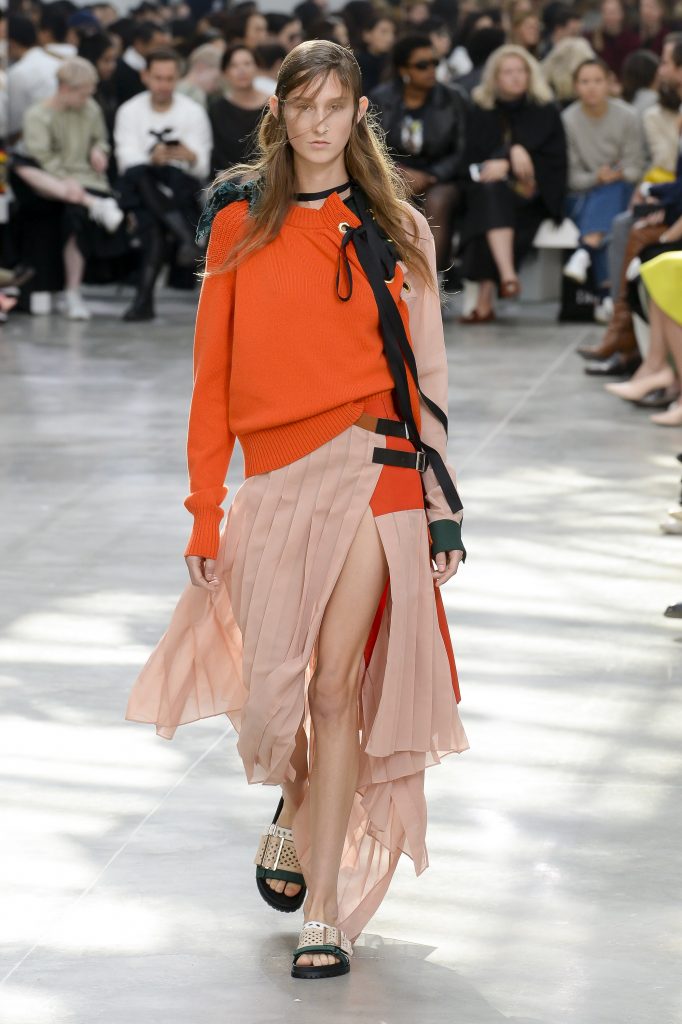