Fashion and art frequently merge, but while painting, writing and music are (sometimes erroneously) considered primarily artistic concerns, fashion design arguably belongs to the commercial world (with architecture and graphic design). As Design Museum Director Alice Rawsthorn puts it, “[f]ashion has a practical purpose, whereas art does not.”

Tsumori Chisato forwards the notion of fashion/art collusion with a postmodern take on things; postmodernism is a great platform for marketing departments to begin selling clothing as art because postmodernist ideas, like marketing ideas can spring from anywhere.

Tsumori Chisato knows what looks great, has a variety of references (manga, pop culture, mainstream art) and wants to create clothes that she would like to wear and that are fun (and that – of course – sell). She has no intention of explaining herself beyond this.

Postmodernism influences not only the way she constructs and illustrates her clothes but is also a feature of the way they are verbally and visually promoted. In creation and promotion Tsumori keeps her references close historically (manga and pop culture, her own experiences) and her opinions simple – postmodern attributes.

Japanese art-forms that achieve recognition overseas are frequently the more democratic variants like kabuki and manga. This is partly because of the western fascination with these forms; the most visual and colourful genres are the ones which are easier to access by those who don’t read or write Japanese, and are then ascribed depth of meaning that may not be implied by the creator.

In Tsumori’s designs we are not encouraged to search for deeper meaning. Inasmuch her clothes are perfect surface adornments, embodying the hyper-accentuated attention to immediacy and accessible visual stimuli that drives the perception of fashion as object as art. 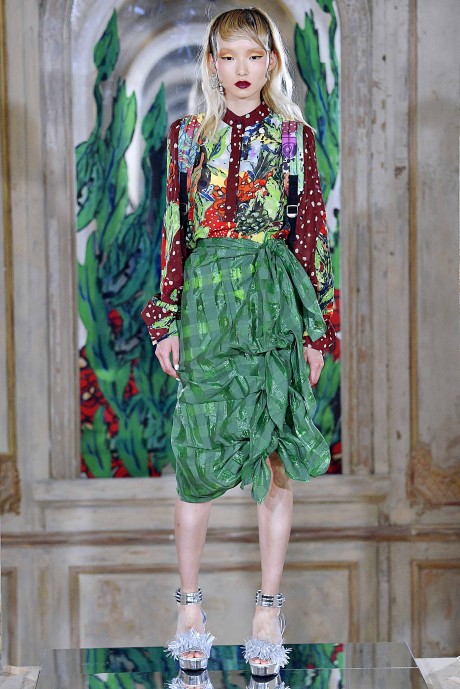